Such an easy-going name, and such a wallop. Rain, wind, and fire. Six days later, the aftermath continues. For some, it will never end. For people who have lost loved ones—tragically, preventably. For people who must rebuild their lives from nothing but determination and an abundances of resources they will not find at Home Depot.

When he came back inside the store [as the storm approached], a woman was sitting at the bottom of a rolling ladder in the cabinet fixtures aisle, crying. She had her face cupped in her hands. He thought to sidestep the hassle and let someone else explain that the store was sold out of everything she would need. “Waterwalkers” in Corpus Christi: Stories, Bret Anthony Johnston, 2005.

The overwhelming reaction among my local friends is, “We were lucky.” There may be a 40-foot tree resting on the roof, they may have no power (or heat or light or refrigeration), the Internet may be down, work and school may be closed, gasoline may be rationed, the quiet inside may be deafening, and outside, the drone of chain saws like a wasp in the brain, but, “We were lucky.” A response that displays a sense of perspective and respects the storm’s startling power.

How a confluence of natural forces can create a “perfect storm” was minutely examined in Sebastian Junger’s 1997 book, whose title has become an overworked metaphor for catastrophic events of all kinds. Junger’s straightforward descriptions don’t allow misinterpretation: “A mature hurricane is by far the most powerful event on earth . . . and could provide all the electric power needed by the United States for three or four years.” No surprise, then, that such a storm could turn oceanfront homes into kindling in a matter of hours. Yet, for some, even the term “mandatory evacuation” didn’t command sufficient attention.

Not giving ground to Nature is a persistent human error. The poor folks who settled around Lake Okeechobee in Zora Neale Hurston’s 1937 novel, Their Eyes Were Watching God, saw the Seminoles, the buzzards, then all the animals leaving the low-lying area around the lake in a determined procession. Some folks heeded these signs and the hurricane warnings, but others paid a hard price for waiting too long.

Another man clung to a cypress tree on a tiny island. A tin roof of a building hung from the branches by electric wires and the wind swung it back and forth like a mighty ax. The man dared not move a step to his right lest this crushing blade split him open. He dared not step left for a large rattlesnake was stretched full length with his head in the wind. 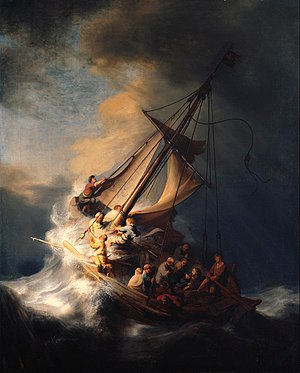 Writers, painters, composers–all have worked to capture the fury of wind and water and the terror and searing grief people feel in the grip of uncontrollable forces.

The King’s son, Ferdinand, with hair upstaring—then like reeds, not hair—was the first man that leaped, cried, “Hell is empty, and all the Devils are here.” Shakespeare, The Tempest, Act I, Scene ii.